This is Scientific American's 60-second Science, I'm Steve Mirsky.
Justin Verlander of the Houston Astros will start tonight's Major League Baseball All-Star Game for the American League. He's in the news for more than that, though. Monday, he told ESPN that the huge rise in home runs this season is due to the fact that the 2019 baseball is what he called "a f-ing joke." Many other players and commentators have questioned whether the ball is "juiced" — that is, made so that it travels farther and faster.
"So, however they are making or creating the baseballs ... they're c﻿﻿oming up with a rounder baseball."
Sports data scientist Meredith Wills. With a doctorate in astrophysics, her first studies were in publications like the Astrophysical Journal and Solar Physics. But her most recent research, on the 2019 baseball, appeared June 25th in the online sports publication the Athletic.
So how do you make a baseball that's rounder than other baseballs? Wills got her hands on 39 Major League baseballs used in 2019. Compared with last year's ball, "The laces are thinner... the leather is substantially smoother... any one of these changes will make the aerodynamics of the ball better, they will decrease the drag. So the way to think of it is that the ball doesn't slow down as quickly when it's traveling through the air, which means that it stays faster longer, which means it's able to travel farther." 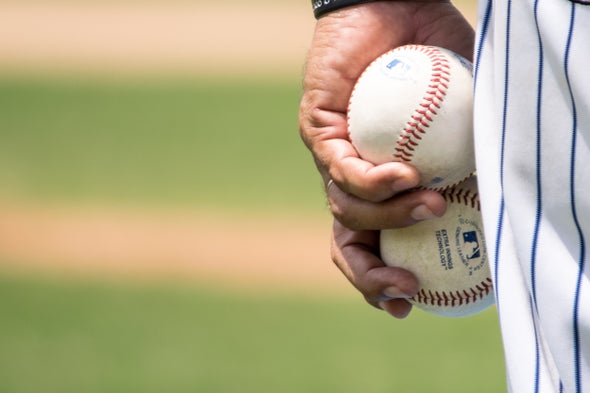 Which could account for part of why the players are on pace to hit more than 6,600 homers this year, up from 5,585 last year. Hitters are clearly also changing their swing plane to try to hit more homers, which is probably also a factor. But another indicator of less drag on the ball is home run distance. Wills notes that 82 home runs went at least 450 feet in 2018. This year has already seen 84 of that distance, with almost half a season to play.
The changes in the ball also make it harder for the pitchers to manipulate it. "There are two problems: one is that it becomes harder to grip the ball in a way that allows you to spin it enough to get break, and then the other one is that the height of the seams themselves can affect how much the ball does break, assuming you get it up to the same spin."
Last year, Major League Baseball bought Rawlings, the company that makes the baseballs. So don't be surprised if next year's ball is once again ever-so-slightly less round—to give pitchers a square deal.
For Scientific American — 60-Second Science. I'm Steve Mirsky.