下載MP3到電腦  [F8鍵暫停/播放]   批量下載MP3到手機
加載中..
On March 26, two of the most important women in Biba Adams’ life went into the hospital with COVID-19 infections, and would soon be fighting for their lives.
Adams dropped her mother, Elaine Head, off at the ER at Beaumont’s Royal Oak hospital at about 11 a.m.
“They put her in a wheelchair. Didn’t even allow me to crack my door open,” Adams says. She was about to say “'Bye mom, I love you,’ and she was in.”
At four that afternoon, Adams’ grandmother, Minnie Head, was taken to Beaumont as well. Minnie and Elaine live together, and spend a lot of time with Adams’ aunt. Adams found out that the virus killed her aunt the very same day. March 26.
Designate one or two people to call, the same time every day
Adams says when hospital staff registered her mom, they had a hard time understanding her speech, so they called her emergency contact.

“And I think probably the saddest thing for me is her two emergency contacts were my grandmother and her sister, my aunt,” Adams says. “And my aunt has now passed away. And my grandmother is also in Beaumont. So ... thinking back on that. I think that's kind of, that feels super sad for me.” 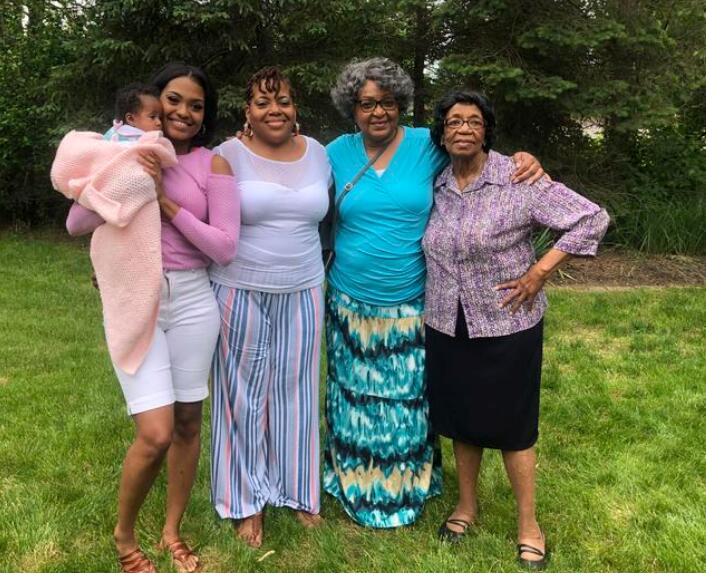 Minnie and Elaine Head were both put on ventilators shortly after they were admitted. Adams says the care her mother and grandmother are receiving at Beaumont is “extraordinary.” She says she’s gotten regular updates from the nursing staff, and she thinks one thing that helps is her family’s strategy.
“I think the smartest thing to do is have, like, one person calling,” Adams says. “So my (other) aunt calls every morning and then I call ... in the evening. And that's it. It shouldn't be, like, a whole bunch of people calling up there…. I think that's helping our family.”
Use technology to connect
A nurse at one of Beaumont’s hospitals – we are withholding her name and hospital to protect her job – describes the current situation as “emotionally draining” for staff trying to manage huge volumes of patients very sick with the new coronavirus.
The patients “are so sick and alone,” she says. “Their family would typically be able to be at the bedside. And their family members were calling all day trying to get updates on them. And I didn't have time to update them because I was trying to just keep them OK."
At Beaumont’s Troy hospital, there are about 100 iPads that nurses can use to connect patients with family members. A nurse there, who also asked not to be named to protect their job, says chaplains also check them out to pray with patients and their families.
“You want to do everything you can to help these people,” the nurse says. “People are literally going and finding out what windows their family members are in and waving at the windows.”
Mary Kay Hill’s sister Theresa Hogan was admitted to Beaumont’s Royal Oak hospital with a COVID-19 infection on March 24. Hill says their family – two brothers, Mary Kay, and her sister Theresa – are very close.
“No matter who's in the hospital, one of us will always be there,” says Hill. “And so that's why it's very difficult for us to not be in a position where we can advocate, especially because my sister is not like me in the way that she understands medical terminology…. Like, she doesn't really know what to look for and what to ask for when it comes to medical stuff.”
Hogan brought a cell phone with her into the hospital, so Hill would text her sister questions to ask the doctor, like “what’s your pulse oximeter reading today?” Then Hogan could relay the answers back to Hill.
But there were long, terrifying stretches where her texts just went… unanswered.
“Our stomachs are in knots and we have like the pit, you know, the dread pit kind of residing within us,” Hill says, not being able to see what’s happening. Knowing how quickly things can go south with COVID-19 infections.
Since our initial interview, Hogan was discharged from the hospital. "I think she's doing better since being in her own bed," Hill says.
Snag a doc’s cell number if you can; use it judiciously
Monique Baker McCormick had a hard time getting her dad, Bruce T. Baker (BT to his friends), to agree to go to the hospital. He could barely stand, she says. But he would not get in her car. Or even open the door to his house to let her in.
Eventually, he relented. McCormick – who is a Wayne County commissioner – took him to the ER at DMC’s Receiving Hospital in Detroit.
“Once I got in the back (of the ER), they told me I couldn't be there and that I had to leave," McCormick says. “It's scary. It's scary for him, and I could see it in his eyes.”
For two entire days, she didn’t hear anything. The second day was her dad’s birthday. He turned 74.
She says those two days were the hardest. The not knowing.
On day three, she got a hold of a hospital staffer who told her her dad was stable. But his room didn’t have a phone, so McCormick couldn’t talk to him.
She kept calling her dad’s doctor, not getting an answer. She’s watching the news, it’s all death and dying.
Finally, on day four, she got to hear his voice.
And on day five, she got a hold of his doctor. He sent her a picture of her dad.
“It is just a wonderful feeling just to see his face and be able to – even though it was he was in the hospital in a hospital bed … just being able to see him and know that he's … still with us.”
On Sunday, Baker was discharged from the hospital. He's doing well, McCormick says. And he finally got his COVID-19 test result back, just before he was released. It came back positive. 來源:可可英語 http://www.bacenbook.cn/Article/202004/608390.shtml
查看《密歇根新聞廣播》更多內容>>
保存到QQ日志   登錄QQ空間
?